Would you like to switch to the accessible version of this site?

Don't need the accessible version of this site?

Can a Chiropractor Help With Scoliosis - Patient Q&A 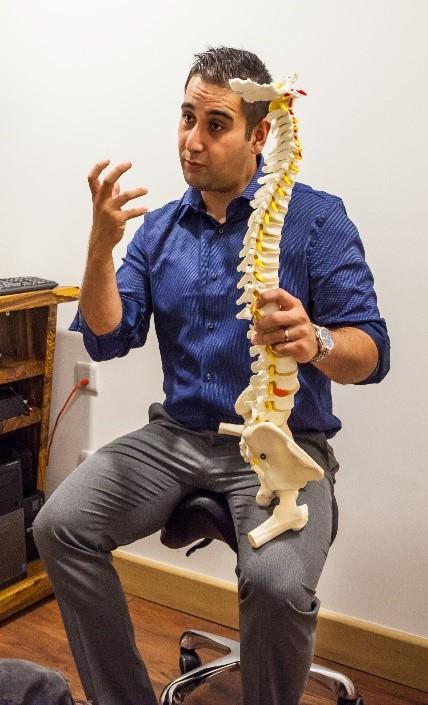 It is hard to imagine the difficulty and emotional hardship which come hand in hand with conditions such as a developed Scoliosis and yet, this is a very real reality for many. However, there are options available which have proven to be helpful and even life-changing for sufferers of Scoliosis and so, if you are wondering; can a Chiropractor help with Scoliosis? then here is a patient Q&A and truly an incredible story.

So How Can a Chiropractor Help with Scoliosis - Here’s an Insightful Patient Q&A;

When were you first aware of your condition?

I first noticed that something wasn't quite right when I was doing ballet lessons at the age of 11. I was at home in my leotard and my mum noticed that my right shoulder blade seemed to stick out slightly and that I was no longer symmetrical.

This was echoed by my ballet teacher, who presumed I was having unusual growth spurts and even tried using masking tape to even me out.

Eventually, I was dragged to the GP by my parents and the doctor asked me to bend over and touch my toes. He then said 'Oh my god, she's got a twisted spine!', I was completely bewildered and the next thing I know we got a phone call saying we had an appointment with the scoliosis clinic. What a way to find out your diagnosis!

How did Scoliosis affect your lifestyle and your emotional well-being?

It's hard to believe now, but to begin with, Scoliosis didn't affect me at all. As with most problems relating to the spine, the problem can be brewing a long time before you even notice it.

The first thing was clothing which didn't fit right, and it started to make me feel very body conscious. Because Scoliosis is a progressive condition, this only got worse over time and I quickly got used to having constant lower back, and shoulder blade pain.

I always wore loose fitting clothes and was encouraged to take constant pain killers. It's only natural that it starts to affect your emotional well-being, knowing that something is always getting worse. Scoliosis curves are measured in Cobb angles and for an adult, the effect of gravity means that it normally gets worse at a degree a 1 degree per year.

My two curves were getting worse by at least 1 degree per month! The orthopedic surgeon told me there was nothing I could do, they would just monitor it as it got worse. To hear that at such a young age is hard, and is something I wouldn't wish on anyone, especially now I am older and know that it wasn't true. Luckily my supportive family and I didn't believe that could be the case and started searching for other options. There is always something you can do to be proactive about your health, there is always hope!

How did your Scoliosis affect you as you got older?

Apart from the pain, another symptom that started to really affect my life was fatigue. By age _ I could hardly lift my arms in the morning and my parents helped me get dressed. This got worse over time and I started to really struggle with my dance lessons and lots of the things I loved. Unfortunately, my symptoms worsened much more than even a severe scoliosis would usually experience.

When I was _ one day I seemed to lose all the power in my arms, it wasn't numb and I still responded to reflexes but the way I described it was 'heavy', like I had no strength to lift it. We presumed that this was just another form of the fatigue I was getting, but it continued to happen, not just to my arms but also my legs, sometime one, sometimes both, sometimes just one side. The length of time also started to increase, and it was accompanied by neurological symptoms of numbness, tingling, and generally feeling like that my limbs were disconnected. The doctors described it as temporary paralysis. My body would return to 'normal' sometimes after a few hours, sometimes it was longer than 24 hours. As you can imagine this had a devastating impact on my life and all of those around me.

Every morning I was a rag doll, I couldn't dress myself, feed myself, get out of bed or down the stairs. Normally after an hour or so of being moved I had a bit more control, but other days I couldn't walk without the help of another person. I soon relied on a wheelchair during these episodes and always had to have it nearby as an episode of paralysis could occur at any time. When I felt a tingling I knew I had minutes to sit down before I could no longer move my limbs. To this day I have never met anyone who had paralysis from Scoliosis, it just shows how complex the nervous system is, and that there is much more to learn.

What avenues of treatment did you explore before Chiropractic Care for You Scoliosis?

When a mother has a child in pain they will try absolutely anything. I was so lucky that before I was old enough to make decisions like that my mum was ringing different people, asking for advice and arranging different things.

Physiotherapy, acupuncture, foot insoles, different school chairs and rucksacks, the list goes on and on. We had a breakthrough when I was 13, we contacted a company who make clothing out of medical grade lycra, as an alternative to hard bracing. I was a guinea pig for them, as they designed and made the first suit for idiopathic scoliosis. It looked like a wetsuit and I wore it 23 hours a day.

This made a huge difference to my daily life as it held me together with much better posture than I had without it. and unlike hard bracing, the aim was that it would still allow my muscles to work. It allowed me to go to school more and still do sport and dance but it did also have disadvantages, and although it aimed to correct the curve, it was never going to make a structural difference. I also went to the Scoliosis SOS clinic in London, anyone who has searched for scoliosis help will have come across them and they do fantastic work. But once again they focus on the muscles, posture, and alignment and not on the structure of the spine.

There is lots of research in this area but it is always going to limit the benefits someone with scoliosis gets and the improved symptoms often don't last long. Finally, lots of people ask me about surgery, which I was told I would need due to the severity and that even if I didn't want it, the decision could be taken out of my hands if it got too bad. By age 12 I was told I was eligible, but in the one year that had passed since my diagnosis, and their negative attitude towards finding anything that could help, we had lost faith in the hospital surgeons. Learning more about it, I decided by age 15 that I was going to do everything in my power to prevent surgery. This was the decision which eventually lead me to see if a Chiropractor can help with my Scoliosis.

How would you manage pain relief before seeing if a Chiropractor can help with your Scoliosis?

I've struggled with pain from quite early in my diagnosis. I'd never broken a bone or had anything other than little injuries as a child so it was a new experience to have permanent pain, and I'm sure that's the case for most children and teenagers who develop Scoliosis. The surgeon told me that Scoliosis is not a painful condition and that it was all in my head.

Now, many people with Scoliosis don't have pain, and if the nervous system is still functioning properly then that's great, you may never experience pain from it, but with curves as severe as mine I was really struggling. I used to spasm so badly that I couldn't move and had to lie flat on my back till the muscles relaxed. The only thing I was given was the standard paracetamol and ibuprofen and then codeine when I was slightly older, but none of it even touched the pain.

I dread to think now, how many tablets I was taking, probably 1000mg of paracetamol every 4 hours every day for at least 4 years. When I was 15 or 16 I started to rebel and stopped taking them, I didn't want to be filling my body with drugs if they didn't do anything. The stretches and exercises I learn from the Scoliosis Clinic in London helped, and then generally staying active but I really thought that I would have to just get on and manage my pain the way it was for the rest of my life.

Did you have any preconceptions of Chiropractic Treatment?

As I've mentioned, I'd tried most things to help my back, but I had always been warned against Chiropractic for some reason. I suppose I also didn't know much about what Chiropractic was, and that lack of education translated itself into presuming that it can't be that good, otherwise, everyone would do it.

I also sympathise with many people who have had ongoing pain for a number of years, because you do start to become very skeptical and almost over protective. It's very easy to stop giving people the chance to help you, because you're worried that it it won't work, or it will go wrong yet again.

That's just one of the reasons why keeping your mental health strong is so important, and if possible, have people around you that are going to help you keep a positive attitude, and never give up looking for something to help. When I first met the team at ROCK, I had no expectations, I didn't think they were going to help me more than anyone else had.

If you have asked yourself; can a Chiropractor help with Scoliosis, perhaps for your own condition, a family member or even a friend and are looking for an Exeter Chiropractor then we hope that you have found this Q&A beneficial and above all, inspiration that bettering your life is possible.